There are so many routines…and they help me get things done.  They get me to work on time , allow me to accomplish the mundane and the inspirational work in my life, and remind me to make time for work and play, relaxation and exercise, books and art and more. But sometimes my routines get in my way.

I almost let that happen today.  I had a meeting at a school site near a picturesque part of our city.  As I pulled up to park I thought about taking some time after the meeting to drive the couple of miles to the cove and see if there was anything to photograph.

After my meeting I wanted to go home.  I knew the traffic would be bad… and it gets dark so early these days…I had lots of excuses.  But then I decided to take that short drive anyway, even if it meant some miserable traffic on my way home.

And I’m so glad I did!  La Jolla Cove is truly a treasure.  This little protected piece of ocean is a refuge for wildlife…and for people.  When I pulled up and immediately found a parking place, I knew this would be worth the spontaneous decision.  I first noticed this little structure with sea gulls roosting on top.  Through it I could see a small fishing boat in the surf.

As I continued up the walkway, I heard barking.  But it wasn’t dogs…it was sea lions!  Some sunbathed in the cool December air while others seemed to play hide and seek in the waves. 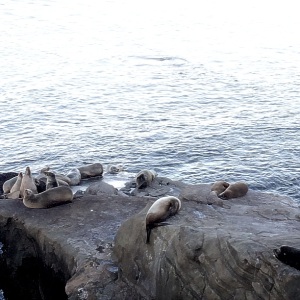 I looked up and noticed pelicans cruising the coast…almost close enough to touch!  (Of course I missed photographing the ones that were close!)

I noticed this big seagull cruising the park area.  He had been perched up on the tree, but had moved on by the time I close enough to use my camera! 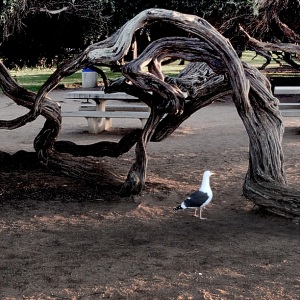 I was right about the traffic, by the way.  It took me more than an hour to get home after this excursion.  But it was so worth it.  My photos don’t begin to do justice to my experience. The sights and sounds and smells along with the crisp, cool air and low afternoon sun made for a perfect respite on a work day.

When I got home it was dark…and I noticed the sliver of moon rising.  Geoff and I headed out after dinner to get gas for my car…and decided to stop by Starbucks for a cup of coffee. And spontaneously, as we turned the corner and spied the moon we headed off to the beach where we knew the view would be spectacular.

And we weren’t disappointed.  That shy smile of the moon reflected on the surf below.  The colors were incredible…whites and golds.  The moon made the water glow…and the froth of the surf curled in frosty waves.  I tried my camera…with little success.

But standing side by side in the dark appreciating the beauty of the moon and water in the cool of December with a hot coffee in our hands was priceless.  A reminder to be spontaneous now and then.  Routines can return tomorrow.

2 thoughts on “Spontaneous: a Photo Essay”