Coding, programming…words that are used to describe the process of “speaking” a machine language.  This week classrooms and schools all over are participating in the Hour of Code, an attempt to get 10 million students to try computer science for an hour during Computer Science Education Week.

If you read this blog you already know that we have been working on computer programming using the Hopscotch app for a while now.  (See here, here, and here)  So in honor of the Hour of Code, we decided to pose a Winter Scene Design Challenge for our students.

Today was the day.  Students were asked to create a scene using Hopscotch that depicts some aspect of winter.  As you might expect, students thought snow, snowmen, Christmas trees, and more.  They were super excited…with my speech students arranging to get out of speech (something they love!) so they could be part of the challenge.

And there were many highlights today–lots of successes, lots of students genuinely collaborating with one another and supporting each other without teacher direction.  But my favorite moment was Esther.  Esther is an 84 year old grandmother who lives in Australia and visits her daughter in our town each year in the winter.  I taught her grandson and granddaughter many years ago (they are both college students now) and Esther has continued to come to our classroom several days a week when she is in town to help out and hang out.

As Esther began to watch the students at work on their winter scenes, I asked her if she would like to try it too.  I handed her my iPad and asked Sophie if she would show Ms. Esther how Hopscotch (and the iPad) worked.

Esther was delighted!  And so was Sophie.  It is wonderful for my students to see the embodiment of lifelong learning…and Esther is just that!

An article I read recently points out the advantages of learning to code:  problem solving, (digital) confidence, and understanding the world.  And I see those advantages when my students work to program.  They also learn about systems…and working through the many variables to figure out why their plan isn’t working as they imagined.  They become persistent and learn the value of iteration.  Each mistake becomes another opportunity for learning rather than a sign of failure.

Here are a few examples of students’ winter scenes:

A first grader who figured out how to use o’s as text features for eyes and nose on his snowman. 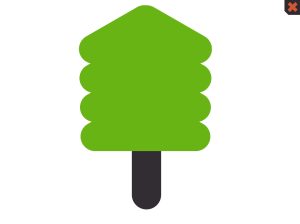 A peppermint candy created by a third grader.

You can see that students are gaining confidence and expertise with this programming tool. Most of these projects were completed in less than 30 minutes and they represent only a fraction of the programming that was happening in the classroom today.  Some of our students are still struggling while others can’t wait to go home and try some more programming on their own time.

Next week we plan to have student-led tutorials where students will teach and learn from each other in small groups.

How was your Hour of Code?  What did students learn and create?

5 thoughts on “Hour of Code”