You might remember that I bought the book, Things to Do, when I was at Powell’s in Portland last week.  (See this link for the post I wrote then)  Today I was feeling like my students needed some poetic inspiration…and pulled out the book to read to them.  They were immediately enamored, many of them remembering the poem by the same author, Things to Do if You’re a Pencil, that we read last year.  We noted the poetic techniques used in each poem and then set out to write our own.  As I started hearing the students’ poems, those tingles started running down my spine!

Here’s a sampling, starting with Lauryn’s poem about dolphins.

Things To Do If You Are A Dolphin

watch surfboards float over the water like clouds in a race,

use echolocation to have conversations,

be silly, be fun,

and soar out of the water like a bird gliding into different worlds,
pretend to be a shark

and put your fin up so it sticks out of the crystal clear water,

perform a parade at the end of the day

when the sunset leans over the water

until it shines bright

onto the dolphins jumping
in the air at the same time

Here’s Sadie’s about an idea.

Things to do if You’re an Idea

Tiptoe into someone’s mind, hatch like a bird in an egg.

Start to grow big and lively, like the moon does in the darkest night.

Break free from your hidden cage, make an impact on the world.

And who can resist the poem from our resident Hamilton-obsessed student! (Think: the musical)

do the things that you believe

My own poem was also inspired by the reading of the book–along with a photo I took of some bikes when I was UCSD yesterday. 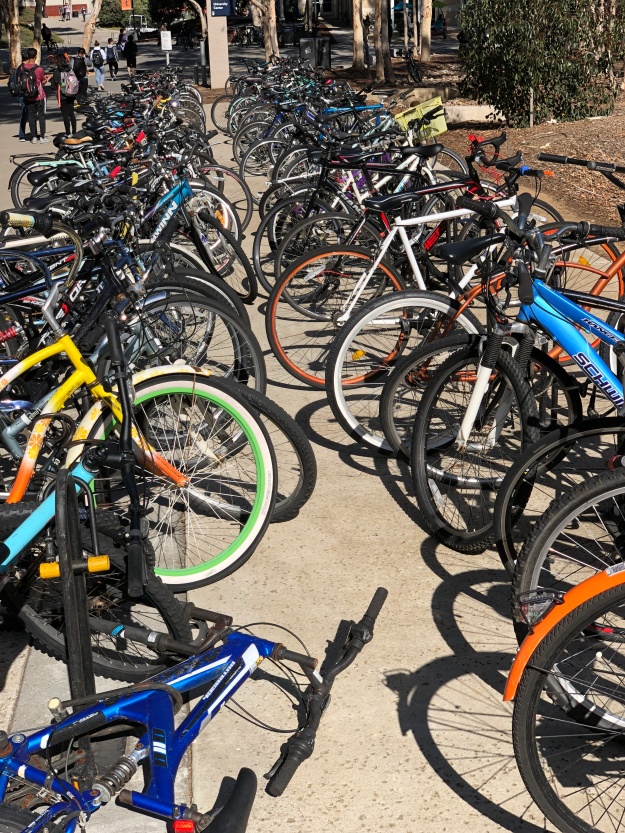 Things to do if You are a Bike

And when you are done

Rest in a rack or in a stack

with your bicycle brethren

We invite you to try out a “things to do” poem…feel free to share yours in the comments!

My Tweets
Join 854 other subscribers