Yesterday’s photography foray into the garden was still on students’ minds today.  I always seem to be living (and teaching) on borrowed time, so after finishing up some other work I was able to give students time to go back and look through the photographs they took yesterday.  I asked them to select their three “best” photos…thinking about the categories/compositional strategies they had tried yesterday.  Then of the three, figure out which one would be best as a black and white image.  I showed my own process, talking through the three photos I selected and showing my black and white image (you can see it on yesterday’s post). They were excited…eager to select, eager to edit, and I smartly limited the time to minutes in the single digits.  I called them together, iPads in hand, and had them all hold up their images.  Stunning, striking, interesting, and sometimes surprising…all words that described those photographs.

And with a few minutes until recess, I reminded students about the poem we had read and studied yesterday: Peeling an Orange  by Eve Merriam.  I started my own poem in front of my students, thinking aloud as I talked through what I saw in this mentor text and writing my poem’s first lines.  I knew they were ready as they suggested ideas for my writing, questioned my decisions, and started asking questions about their own writing-to-be.

There is something magical about writing under the influence.  EVERY SINGLE STUDENT in my class had a title and an path forward for their poem in less than 5 minutes…and were asking when they would have time to return to this writing as we walked out to recess.

Just enough structure and lots choice meant students took photos of what caught their eyes. Being outdoors, wandering through the garden felt more like play than work–offering opportunities for creativity and exploration.  Selecting meant making some intentional choices–but choices again.  And nothing makes my students happier than messing with filters in editing mode!

We read and study a poem each week, so my students are familiar with poetry as a mentor text.  They know me well, expecting to write any time we do something creative and artistic. And there is something wonderful about writing short.  Small poems invite students to try something new, explore language, and still know the end is in sight.  The lift is somehow just right. 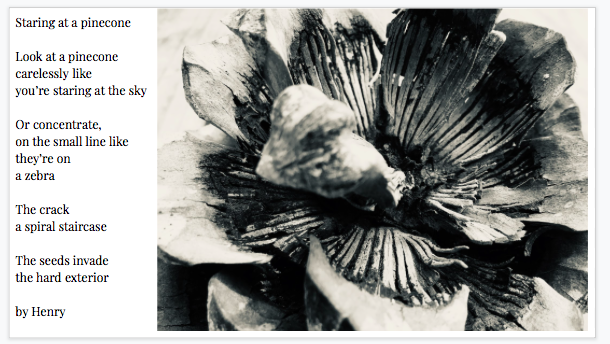 And on some crazy whim, I decided to have my students create a slide deck of their small poems and photographs this afternoon.  (Reminiscent of something we did for #writeout and #clmooc)  So here they are:  first draft small poems and Ansel Adam-inspired photos from the garden.  We were definitely under the influence:  of nature, of photography, of freedom and choice, of a mentor text, and of a community of writers composing together.

7 thoughts on “SOLC Day 3: Writing Under the Influence”