A rainy Saturday set the scene for our adventure.  Remember, rain in San Diego is an event! The smallest amount makes our roads crazy and all the talk…on news stations, in coffee shops, in bars, on the street…is about the rain.

On the surface, we told ourselves that we were off to do some holiday shopping, but really we were looking for a bit of adventure!  Parking itself was an adventure…and as we searched we discovered that we were just in time for the Little Italy Tree Lighting Festival. And as we searched for parking we also spied this magnificent rainbow. 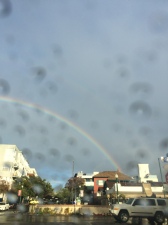 Once parked we emerged into the cool, crisp afternoon.  The rain was done for the time being, the sun made an appearance…a perfect time for a bit of exploring.

As we wandered and walked and ate and talked the sun began to set, painting splotches of brilliant pink onto the gray rain clouds in the distance. 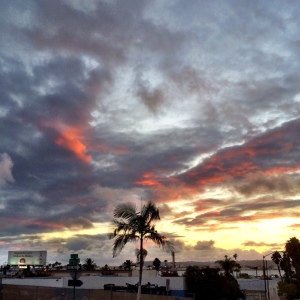 We explored the booths at the festival as darkness arrived and looked up, turned to each other and asked…what is that?  Small white flakes floated in the air…could it be…  As always, as someone who grew up in dry, relatively warm southern CA, when I saw the flakes my first thought was ash…a fire?  No…snow swirled and danced in the glow of the lights. Snow?  Really? 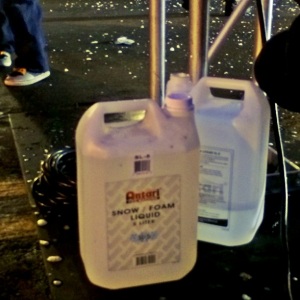 Sure, it was snow.  The man-made variety.  But it did lend an air of festivity and winter-ness to the event.  It was noisy…and turned off and on as the guy manned the switch.  But when it was blowing snow, everyone around responded.  Children danced and chased the flakes, trying to capture them in their hands, on their tongues (I have no idea how it tastes), in their outstretched hats.  Adults flocked around capturing pictures of their children, of each other, and of themselves.

I haven’t yet had the opportunity to try my hand at photographing snowflakes…and this version of snow lacked the hush and wonder of the snow gifted from clouds.  But it was fun and unexpected.  Remember, we think light rainfall is a major weather event.  So snow in San Diego…  Maybe a snow day will be next…

There was an error retrieving images from Instagram. An attempt will be remade in a few minutes.