I had the opportunity today to see a museum through the eyes of people who helped to design it and nurture its continued growth.  The North Carolina Museum of Natural Sciences is a gem. The museum is a combination of old and new, growing from a robust history of collection and curation to a modern space of interaction, interrelationships, research, and digital tools.  There is something about a tour led by the director of exhibits who clearly loves his work and his museum that refracts the museum experience, bending the light in ways that allowed me to appreciate nuances of museum craft and scientific discovery and learning that I hadn’t considered before.

Having a working research lab in the middle of the museum (actually several of them) seems ingenious!  Partnerships with local universities bring scientists out into the open, working in modern, state of the art facilities behind clear class walls.  Seeing scientists at work helps to demystify what it means to be a scientist…and they are able to interact with museum visitors, answering questions and explaining their work. 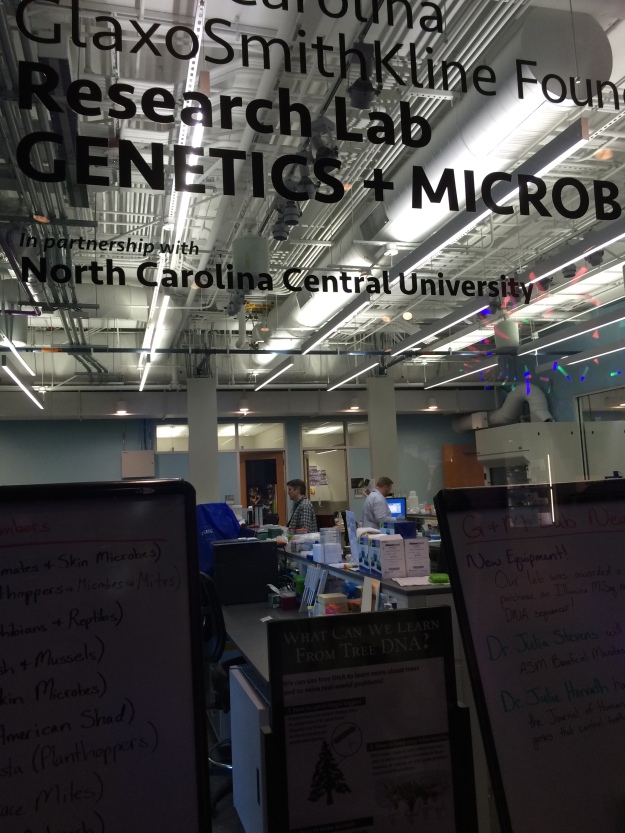 And this interactive projection allows the glass between the lab and the exhibit to nearly disappear, and also works as a tool for the scientists to use to explain their work with school groups and tour groups. 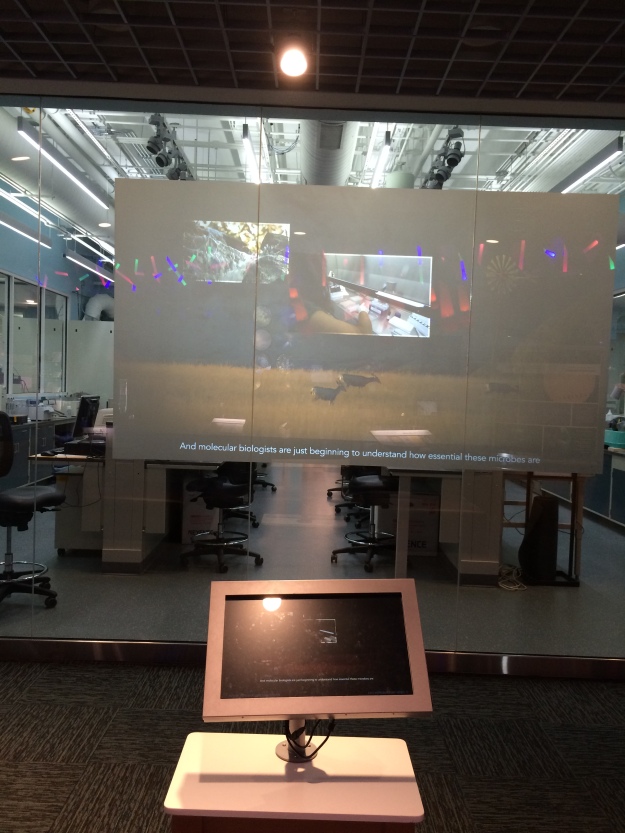 Augmented reality and robotics allow young people access to difficult to understand concepts, using models they can virtually hold and manipulate as they watch atoms come together to form molecules or see the changes in the earth as it is impacted by fire, drought, and storms. This robot, whose head was printed using a 3-d printer, will soon be roaming the museum responding to questions asked by museum guests. 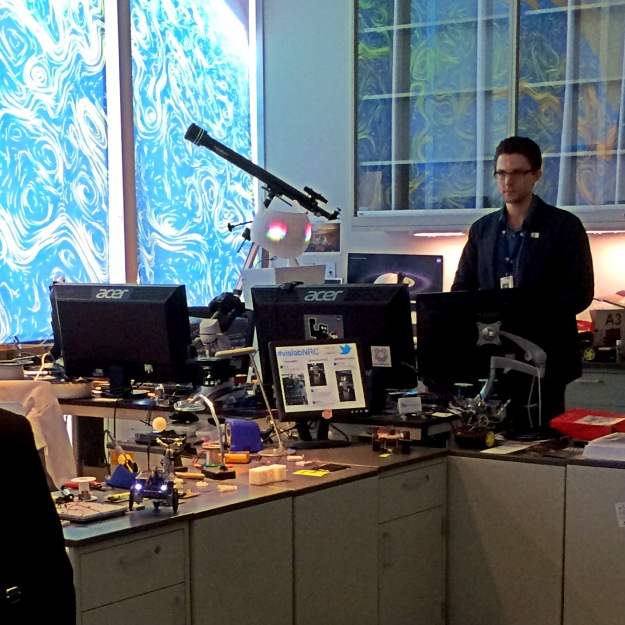 The story of this right whale is both a tragedy and a triumph.  Killed by a boat, its skeleton and that of its fetus were recovered and studied by scientists.  Experiments to determine the speed a boat would require to break the facial bone of a whale and kill it resulted in legislation slowing boats during the migration season of the right whales off the Atlantic coast.  Here’s a great example of science working to save a vanishing species! 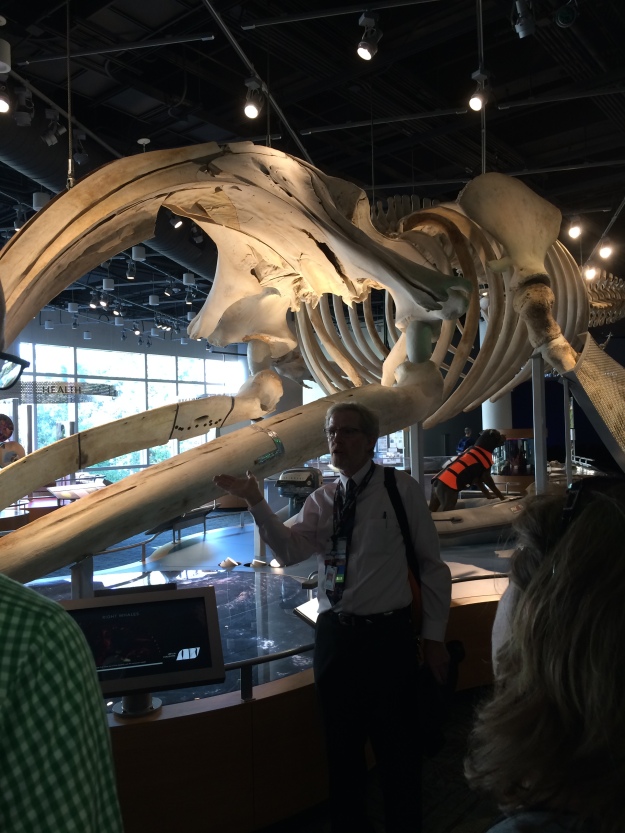 And in a unique space, short visual narratives mesmerize you with their beauty and fascinate you with their complexity.  Balconies allow you to stop and watch from different locations and you can easily dip in and out of the viewing experience.  This sequence on networks grabbed my attention…I know i want to think more about the different kinds of networks in our lives, how they are similar and different, organic and manmade…and how light and movement help us understand them. 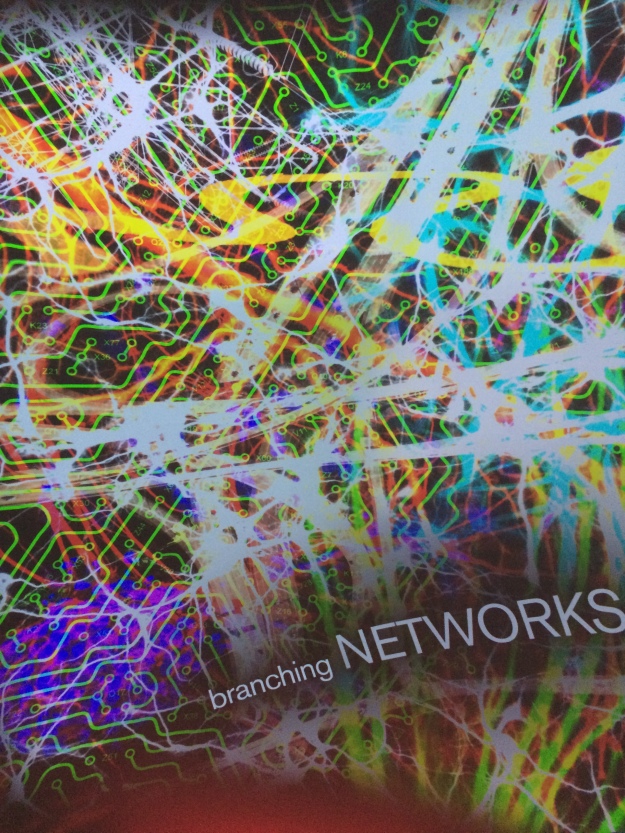 These mini movies were projected on the inside of a curved surface that just happens to be this extraordinary globe from the outside of the building…another interesting and beautiful way to learn about our world. 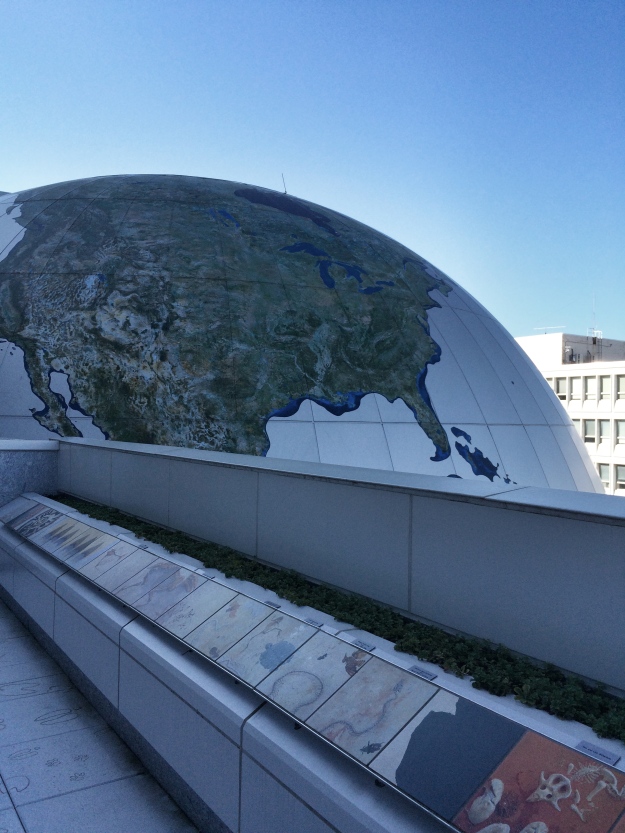 Today’s tour allowed me to experience the museum in a new light, refracted by the passion of those who know this place intimately.  This post only begins to scratch the surface of what I saw, heard, and experienced in my short visit.  And I’m lucky, I get to return to the museum again tomorrow when it will be filled with museum people from all over the world as they socialize and learn from each other.  I can only imagine what new insights I will gain as I return to this magnificent place of science, research, and learning.

My Tweets
Join 855 other subscribers