Some places are instantly recognizable by symbolic landmarks…the Golden Gate Bridge, the Eiffel Tower, the Statue of Liberty or the Empire State Building…even the reflective bean (I don’t know its official name, but I know where it is), the London Eye, St. Louis’s arch or the Space Needle.  What systems allow us to know those symbolic places without having visited?  Systems of communications, news, arts…  Some I know firsthand, some I know from watching TV, movies, seeing art exhibits, social media, and more.

But when I think of my place, I can’t imagine what large landmark people unfamiliar with my place would immediately recognize as San Diego.  But there is this large body of water that extends along the western border of our place…the Pacific Ocean.

Most days I notice the ocean from the vantage of the land, looking over cliffs, walking in the surf along the shore, looking below as I cross a bridge or stand on a balcony above.  But over the weekend I had the opportunity (thanks Joe and Katie) to step aboard a beautiful sailboat and view the ocean, and discover local symbols and landmarks from a different vantage.

A week or more of heavy overcast and summer cold and gray turned sunny and blue as we headed toward the open ocean.  Under sail with wind power, we breathed in the briny air and soaked up the sun, surrounded by every shade and hue of blue.  The ocean has its own rhythms as the sea interacts with the wind and the land, unpredictable and powerful.  As we moved further into the open sea, vast blue enveloped our sight along with a sense of solitariness…even though we weren’t alone.

Systems of ropes and pulleys interact with large sheets of sail, wind, weather, and the knowledge of the sailor.  A turn of the wheel is reflected in a change of course that changes the way the wind sits in the sails that impacts the speed of the boat.  An unexpected gust with an inexperienced navigator can cause the boat to heel unexpectedly or abruptly change direction! I noticed that sailors have lots of tools that help them with their systems…the obvious instrumentation that give readings of water depth, speed, direction and the less obvious colored strings that blow in the breeze, the different colored ropes, the sheen (or lack of sheen) of the water that indicates breeze, the feel of the breeze on the cheek. 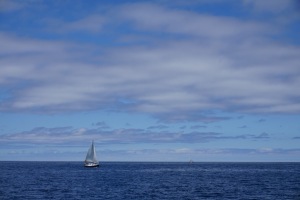 We passed buoys along our way where sea lions basked and sang in the sun, 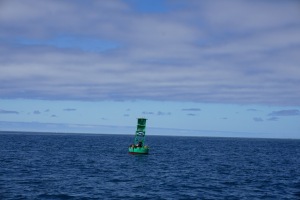 and seagulls served as sentry, overseeing the watery world.  And these too are part of the navigational system of the waterways.  They are symbols that show ships where to travel to avoid shallows, that mark the water in the ways that lane lines and exits mark our freeways. 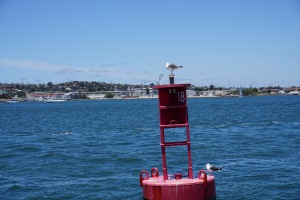 As we headed back into the bay, we had the opportunity to see our city skyline from the outside in rather than the inside out.  And it never hurts to have a beautiful sailboat as part of the view! The hustle and bustle of the city was replicated in the water with many people enjoying the water on every kind of boat: tour boats, speed boats, fishing boats, luxury boats, racing boats, tiny boats, large boats and even jet skis.

Invisible systems of etiquette acknowledge which seacraft are most maneuverable.  Sails have the right of way over motors…but like on our roadways, inexperience or recklessness remind us that right of way is no guarantee of safety.  Paying attention to others is crucial at sea, just as it is on the streets of our beautiful city.

As we got closer the blue curve of the Coronado Bay Bridge came into view.  This is probably the closest thing to an iconic symbol that we have in our city.  And another view of its beauty is revealed from below as I noticed the way it snakes down in a gentle curve as it crosses the span of the bay.

Coming back through from the other direction, I noticed the optical illusions of distance as it seems that the mast of the sailboat crossing below will certainly scrape the bottom the bridge.

Under sail we were at the mercy of the wind to keep us moving.  And since the wind doesn’t conveniently change direction when you want to go back the other way, a system of tacking or intentional turns allows the sailor to keep the wind in the sails by crisscrossing across the path to reach the desired destination.  (Remember those pulleys and the wheel?  They all come into play during the tacking process!)

San Diego is a military town, and nowhere is it more obvious than in the San Diego Bay.  The Midway, a decommissioned aircraft carrier turned museum, is visible along the waterfront. From the street, it is an impressive sight.  From the water, it is spectacular!

And what system allowed this majestic and enormous vessel to become a floating museum? And what systems interact to keep it functioning?  I know there are educational elements with school field trips, ceremonial elements with honoring of military personnel, tourism elements that bring visitors into contact with military history…

As we headed back toward the marina, we noticed the tugboats heading toward the ocean. These brilliant orange workhorses are fast and powerful, churning water in their wake (and creating some waves for us aboard a sailboat!).  We knew they would be used to escort a big ship into the bay. What would it be?

What systems are in play when these small but powerful boats are deployed as escorts?  How do they interact with this enormous whale of a warship?

We searched the mouth of the bay, waiting for the ship to come into our line of sight.  We were soon greeted by the USS Carl Vinson, an aircraft carrier, along with military police and two tugboats coming into the bay.  The deck was lined with people who looked to be in civilian clothes.  Was this the end of a dependents’ cruise (where family members go out on the military ship)?

Is this a system created to acknowledge the hardships of having a loved one at sea for months at a time, a way to allow families to reconnect by making the workplace more familiar and accessible?

We had a front row seat as we watched this elegant gray giant enter the bay.  Other recreational boats gathered round, also taking in the view of this symbol of power and strength–our military might.  Earlier in the day we had passed other military vessels–but all were docked.  Seeing this ship under power is a less than usual sight.

And then there is the military as a system.  It is often invisible to those of us outside of it.  And yet, in this city where I live the military is ever present.  The ins and outs of military vessels are only a small part of the military system.  Behind each ship are interconnected webs of systems that keep them running, informed, stocked, maintained, staffed…

Our outing came to an end as the marina came into view and we navigated our way back into the slip that is home to this sailboat.  But the journey on a boat doesn’t end with the parking. There are sails to be furled, ropes to be tied, hatches to close, instruments to put away…more systems in play to keep the boat maintained and ready for the next use.

A leisurely day on the ocean…not quite.  But a beautiful day on the ocean…absolutely!  Thanks so much Katie and Joe for including us and allowing us to experience so many symbols of our city from a different perspective.

I noticed so many systems that I don’t ordinarily pay attention to during this one outing (and there are likely many, many more that I didn’t even mention!)  What systems are going on in your place?  How do they impact you and others?

My Tweets
Join 854 other subscribers

As the #sunset closes out the week, I’m #grateful for the opportunity to work with amazing teachers across the nation, examining and #appreciating student #writing, and continually #learning to improve my own #practice. #nwp #sdawp #rangefinding #beach #orange #water #breathe #nature
A #dose of #nature as a pick-me-up at the end of an incredible and intense day…and week of #rangefinding. #waves #pelicans #silhouette #nwp #writing #breathe #sunset #meditation
The perfect accompaniment to intensive #nwp #rangefinding. #scones #bakedwithlove #scratch #nofilter #zoom #perks Thanks @deathstr42 !