Sunday’s prompt for #sdawpphotovoices had to do with shadows.  (It’s part of our exploration of photography techniques…light is this week’s focus)

And of course, Sunday was overcast most of the day.  So when the sun peeked out from behind the clouds in the later afternoon, I headed outside in search of some shadows.  The first shadow I noticed was my own.  But I’ve taken that shot before (see my post of shadow selfies).

At first it seemed hard to find interesting shadows…and then I started looking for shadows of ordinary things and I spotted this leaf near the hose…a still life with shadow!

Further down the street I noticed that the neighbor’s basketball hoop was making a shadow on the street.  If you look closely, you can almost see the net within the square backboard. 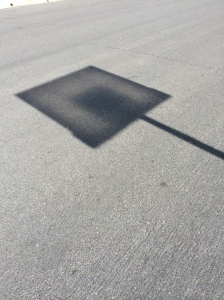 As I headed back through the fence to my backyard, I noticed the shadow on the fence.  I love the ways the branches intersect in the shadow.

The sun ducked back undercover shortly after my excursion outside, but not before I caught a shadow inside, as the sun shone through the slates of the window blinds onto the floor creating an interesting repeating pattern.

I wasn’t excited about taking a picture of a shadow, especially when the sun wasn’t shining when I was out away from home.  But once I headed out and started re-seeing my neighborhood in a playful way…on a shadow hunt…I discovered more than i imagined, and I was having fun chasing after shadows.  There were more that I didn’t include here…including a couple of accidental shadow selfies!

Over coffee with a friend this afternoon, our conversation circled around to play…and the need for teachers to be having fun and playing while they are teaching and working with students.  You know if you, as the teacher, are not having fun, then your students aren’t either. And I don’t know about you, but I always find that I learn the most when I am having fun…almost not even noticing that I am making an effort!

Yesterday’s post focused on my sandcastle collection, digital documentation of sandcastles I have found during my walks on the beach over the last week or so.  As I wrote the post I realized that I was collecting other people’s sandcastles–but hadn’t taken the time to build one of my own in a very long time.

Today was the perfect day for a beach walk.  The marine layer cleared early, the sun made an appearance, the water temperature was reported to be at 70 degrees (that’s warm for ocean water here!) and…low tide was perfectly timed at midday.  As Geoff and I headed out for a walk, we grabbed some tools and decided we would make a sandcastle and enjoy a bit of playing in the sand. 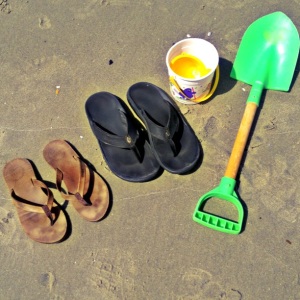 We walked up the beach and picked a place near the edge of the water and away from the crowds of people to get started with our castle. 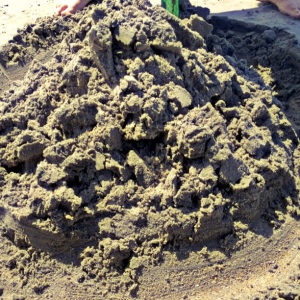 Once we had a base to work from, the fun really began!  We pushed and patted the sand into shape, used the bucket as a mold to create the castle spires, and our castle began to take shape.

Gathering water in the bucket and mixing in sand allowed us to drizzle sand to create more texture and detail.  We scoured the nearby area for small rocks, shell bits and pieces of kelp for detail.  A small sand crab moved in (although his camouflage abilities made him impossible to catch in a photo).

We had such fun building this castle today!  It was a bit tricky keeping my phone handy and away from the sand.  My shorts became my towel for wiping ocean-cleaned hands.  Here I am with the final product!

After finishing our sandcastle, we continued our walk leaving our castle for others to enjoy. The tide was still going down so we knew the surf would leave the castle for a while…and we visited it again on our way back from the walk.  And I added some other sandcastles to my collection too!  (There were some master castle builders out today!)

I’m reminded that taking the time to make and play are essential.  Geoff and I had so much fun and the process of making for myself gives me new understandings and appreciation for the sandcastles I will continue to collect.  When was the last time you made a sandcastle?